Sunday, November 27 2022 - 11:29 pm
Top Posts
The Nongirly Holiday Gift Guide...
Nongirly’s Holiday Gift Guide: Kids’...
T-shirts With Empowering Messages For...
NonGirly’s Holiday Gift Guide: Best...
Rosanna Arquette: A Pursuit of...
What Does It Mean to...
NonGirly Girls: 3 Helpful Tips...
How to Find Your Path...
8 Signs You Are Robbing...
10 Signs You Have Forgotten...
My Daughter Is Super Weird,...
How Positive Thinking Boosts Tween...
10 Tips for Building Self-Confidence...
The Middle School Survival Guide...
A Matter of Admitting Your...
Home » Kamala Lopez: President and Founder of Equal Means Equal
Nongirly NewsStories of a Girl

A Haunting Revelation for Women

It took the ghost of Alice Paul —a women’s rights leader who proposed the original Equal Rights Amendment— for Kamala Lopez’s life purpose to take a swerve in a new direction. Lopez —an award-winning actress and filmmaker— was debuting her feature film, A Single Woman, at the Smithsonian Institute in Washington D.C. at the time. Her 2008 film highlighted the life of Jeanette Rankin, the first woman elected to Congress four years before the 1923 passage of the 19th amendment that granted women the right to vote. As she walked through the lobby of the museum, Lopez spotted an eerie suffragist clad in white.

“I went up to this lady, and I was like, ‘Hi, and who are you?’,” Lopez recounted. “She was a good actress, and she just said, ‘I’m Alice Paul, back to haunt you, because you haven’t done anything to ratify the Equal Rights Amendment, and women are still not equal in this country.’ And I just was like, wait a minute, what?!”

Lopez described the moment to NonGirly as a mental crash of denial. It was like having gone a lifetime believing she was indeed, equal.

“My brain cracked, at first I didn’t believe her” she said. “I was like, Oh, my God, they had this woman, who doesn’t know what she’s talking about. She’s out talking some trash.”

Overcoming Denial: The Start of a Journey to Pursue Equality

The ghastly words were enough to send Lopez into a research frenzy, discovering what she found fitting to describe as a countrywide gaslighting effort against women who believed that gender inequity was mostly collectively solved with acts like the Civil Rights, Violence Against Women, and Title IX.

“The more I looked, the more I was like, wow, they really tricked us big time,” she realized. “We are so effed right now! Because 96% of this country believes we already have rights we don’t have and suddenly I got into a panic.”

A Catalyst for Equal Rights Resurrection

Lopez quickly alchemized her state of shock into political activism. She did this by focusing strongly on promoting awareness of the glaring equal rights disparity in the United States Constitution. The nearly 100-year-old Equal Rights Amendment (ERA) came shortly after women were granted the right to vote and was originally authored by Alice Paul. It specifically stated that men and women should have equal rights throughout the United States and every place subject to its jurisdiction. About 20 years later in 1943, Paul expanded the language to read: Equality of rights under the law shall not be denied or abridged by the United States or by any state on account of sex.

It took decades since the women’s suffrage movement and Paul’s early advocacy efforts that a women’s movement in favor of the ERA would again emerge in the late 1960s. Widespread activism eventually led to its passing in 1972, leaving the states to ratify and solidify its legality within a seven-year limit. An advocacy race for 38 state ratifications would then commence, coming up short by three states, even after a three-year deadline extension that expired in 1982. Decades would pass before Alice Paul’s haunting would spook Lopez’s feminist path in 2008, mobilizing the movement necessary to revive the ERA’s momentum.

The ERA Education Project: Raising Awareness on the Cons of Gender Inequality

Lopez launched the ERA Education Project in 2009 to raise awareness about the lack of legal equality for women. Years of public service announcements, campaigning, and public speaking tours eventually birthed a director out of Lopez in the production of Equal Means Equal alongside her mother and Executive Producer Liz Lopez.

Among the Lopez team were Kamala’s husband and producer, Joel Marshall, Gini Sikes (co-writer/producer), Patricia Arquette (executive producer), and Jyoti Sarda (co-executive producer). The documentary garnered countless accolades for its explosive exposure of inadequacies existing in women’s rights, including the Best U.S. Documentary Audience Award in Michael Moore’s 2016 Traverse Film Festival. The film takes a holistic view of women’s issues. These issues include pay and earnings gap, health and reproductive rights, incarceration, and domestic violence, among several others. Cohesively highlighting the connections between such themes reveals how the Equal Rights Amendment becomes the focal point of resolution to the atrocious consequences of gender inequality.

The ERA’s Impact on American Politics

The ERA was thrust back into the limelight as the film became the choice weaponry for activists and educators across the country fighting for women’s equal rights.

Not long after the premier of Equal Means Equal, the ERA was awakened from its legislative dormancy by back-to-back ratifications from Nevada and Illinois in 2017 and 2018. Virginia made history in on January 27, 2020, to become the 38th state to ratify the Equal Rights Amendment, followed immediately by the introduction of legislation to remove the ratification time limit, of which the U.S. House of Representatives voted in favor.

Currently, the new joint resolution legislation awaits a Senate vote for dismissal of those time constraints to officially include the Equal Rights Amendment in the United States Constitution. The team at Equal Means Equal organizes and promotes rallies and campaigns regularly to amplify the need to get the ERA to the Constitutional finish line. To take personal action in writing a letter to your senator(s) to eliminate the ERA deadline, find their contact information here or help fuel the fight for equal rights with Equal Means Equal here. 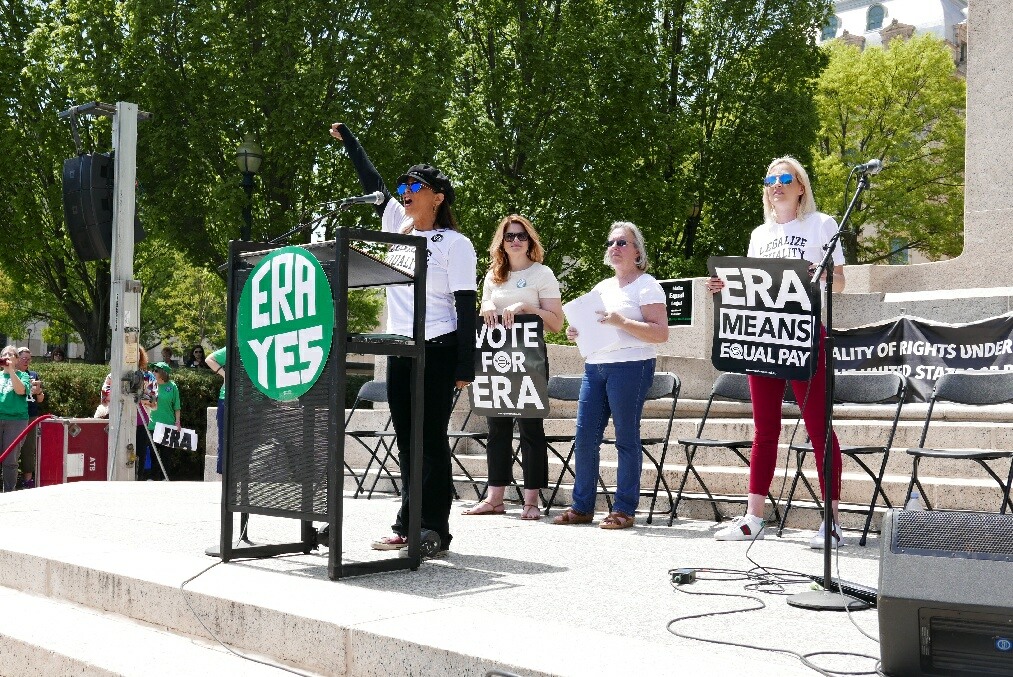 The Roots of a Renegade

The American dream, as told by nuns at an Indian boarding school, was a life that Lopez’s mother, Liz Lopez, was determined to make a reality.

“As a young girl, she learned about America, where we believe that all people are equal, and should be treated equally,” Lopez spoke of her young mother. “She learned that how hard you work is what matters, what you do with your character is what matters.”

Lopez’s mother was one of 200 Indian people who, at 15, made the solitary trek to the United States in 1954, where she married and started a family, paving the way for Kamala’s path in reinforcing the American dream of equality.

“My mother raised me to believe that if something isn’t right, you don’t just go along,” Lopez explained of the upbringing that guided her into an activist platform. “What’s right is right, what’s wrong is wrong, you know what it is, and you fight for it.”

New York City-born and Venezuela-raised Lopez had moved back to Brooklyn with her family. It was here when she was cast in Sesame Street as a teenager in her early acting career. She did two seasons on the show. Afterward, she got into Yale University, where she earned a bachelor’s degree in philosophy and theater studies. In the 1980s, Lopez pursued a film and acting career in Los Angeles, having graced the sets of over 30 feature films and 60 television shows. By the 1990s, Lopez founded Heroica Films to combine her early women’s advocacy efforts with her talents as a film producer, director, and writer. A Single Woman was her first feature film as a director. In this film she shepherded her path to Alice Paul’s apparition act. Also, because of this film she earned the 2009 Exceptional Merit in Media Award from the National Women’s Political Caucus.

Lopez’s trail of recognition goes beyond her work in the film industry in her championing for women and girls. Her passionate presence reverberates across various non-profits, municipalities, and agencies, including Gang and Prevention Unit of the Los Angeles Unified School District, Girls and Gangs, eNews’ 21 Leaders for the 21st Century, L.A.’s Board of Supervisors and Women’s Commission, the State of California and Equal Rights Activists. Most recently in 2019, the inaugural YaleWomen Impact Award for Excellence honored Lopez from her alma mater. Also, the City of West Hollywood granted her the Women in Leadership Award.

Currently, Lopez and her mother continue to share their passion for leading the fight for women’s equality as part of the Equal Means Equal movement.

Believe Your Own Truth

Lopez expressed words of encouragement to Nongirly teenagers and young women struggling with self-acceptance within the current social constructs that oppress true connection to their purpose in life.

“It’s an incredibly difficult time that you’re going through, in hindsight, I would say, it probably stands out as the most difficult time of my life. That time that you’re experiencing right now, I know you have very little perspective on it. But know that the changes that you’re feeling or thinking about are extremely profound. And, most importantly, no one should minimize that what you’re experiencing is real and true and monumental. You know who you are. In fact, you’ve known who you were, from the time you were four or five. And love yourself and don’t let that go. When you see these other influences come in, judge them from the point of view of that eight-year-old that knew exactly who she was. Know that you know your truth, believe your own truth more than anybody else.’’

‘’If you feel that you have a calling, and you want to do something that’s unconventional, don’t be led by convention. The greatest evolution that the human being or the human species ever experiences is through individual, unconventional action. So that really is what pushes the entire human species forward is that person that says, ‘You know what? I’m going to do things differently. You know what? I’m going to go convince 80,000 men to vote for me so that I can get millions of women to vote.’ It seemed like a crazy idea. But it worked.

Listen to your heart and listen to your gut, and you will not be wrong. Always do what you love. Never do something you do not love to do because you’ll be very unhappy for the rest of your life. Even if your parents say, ‘Oh, you’ve got to be a lawyer! Because being a lawyer is going to mean that you’re going to have a stable life. Therefore, you’re going to have money for the rest of your life.’ Number one, that’s not true. They don’t know that. Number two, you could be very, very unhappy for your whole life. Maybe you just want to grow potatoes. Maybe you do want to bake a cherry pie every day. Nothing wrong with it. But what is wrong is to have other people tell you what to do and believe them.”

What Your Tomboy Daughter Isn’t Telling You

Alia Khan’s path to a Career in Arctic...

Beyond Disabilities: Tricia Downing, an Athlete With an...

Rosanna Arquette: A Pursuit of Gender Equality in...

Women in Architecture: Leslie Saul’s Journey Into a...

Melinda Hill on Choosing a Non-Traditional Career, the...

We challenge the traditional perception of what it means to be a female and lead the way for women and girls who appreciate assertiveness, education, variety, diversity, and inclusivity